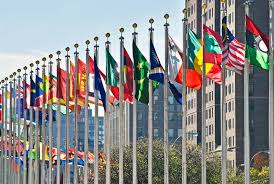 By pretty on Jun 12, 2017 in Sustainable Development Goals |

6 June 2017: Twelve countries that will present Voluntary National Reviews (VNRs) at the 2017 session of the UN High-level Political Forum on Sustainable Development (HLPF) are part of the small island developing States (SIDS), least developed countries (LDCs) or landlocked developing countries (LLDCs). Most of these countries have shared the “main messages” of their reports, showing that many have made institutional and consultative arrangements for implementing the SDGs and are currently establishing follow-up mechanisms.

The VNRs are a component of the 2030 Agenda for Sustainable Development follow-up and review process at the global level, and are presented during the annual session of the HLPF under the auspices of the UN Economic and Social Council (ECOSOC). Through the VNRs, governments discuss national efforts in implementing the SDGs. According to UN General Assembly resolution 70/299, the VNRs aim to “facilitate the sharing of experiences, including successes, challenges and lessons learned.” The Division for Sustainable Development of the UN Department of Economic and Social Affairs (DESA) has created an online platform for the VNRs, featuring the main messages from each volunteering country.

As per these main messages, Belize (SIDS) says it has adopted the ‘Growth and Sustainable Development Strategy (GSDS) 2016-2020,’ which serves as a national integrated development strategy that incorporates the principles and priorities of the SDGs. It reports that a GSDS Monitoring and Evaluation Framework has been developed, and that the Statistical Institute of Belize has embarked on a program to enhance its capacity to act as the central repository for GSDS and SDG statistics. Belize says it will discuss in particular SDG 5 (gender equality) and 14 (life below water) during the HLPF.

The Maldives (SIDS) notes that it will carry out a rapid integrated assessment and identify national priorities for the SDG targets through consultations with implementing agencies, civil society and the private sector. The Maldives has established a National Ministerial Coordination Committee to provide overall policy guidance and political support towards the implementation of SDGs, supported by a Technical Committee on SDGs that brings together representatives from various government institutions and civil society. On monitoring, the country is identifying data gaps and will develop a monitoring framework to monitor and report on SDG targets achievements. It plans to organize focused awareness sessions for parliamentarians, local councils, and members of the judiciary, non governmental organizations (NGOs), students and the general public by the end of 2017.

Bangladesh (LDC) notes that it has integrated the 2030 Agenda in its seventh Five Year Plan (FYPs) 2016-2020, and should finalize an action plan for implementing the SDGs in line with the FYP by June 2017. At the institutional level, Bangladesh has established an ‘SDGs Implementation and Monitoring Committee’ at the Prime Minister’s Office to facilitate implementation of the SDGs Action Plan, and has introduced an Annual Performance Agreement (APA), which serve as a results-based performance management system that assesses individual and ministries performance. It reports that it has mapped out lead, co-lead and associate ministries against each SDG target to reduce duplication of efforts and enhance synergies. According to its main messages document, the government has data for 70 indicators, partially available data for 108 indicators, and needs to devise new data mining mechanisms for 63 indicators.

Benin (LDC) reports that it has organized a high-level seminar on the SDGs and the Paris Agreement on climate change, as well as several awareness-raising workshops on the SDGs and the 2030 Agenda for public decision-makers, administrators, civil society organizations, universities, the private sector, young people, women, parliamentarians and the media, among others. It has adopted an institutional framework structured around four thematic groups (Social, Economic, Environmental and Governance) organized around focal points responsible for planning and programming in sectoral ministries, and supported by various stakeholders. Based on a mapping exercise, approximately 60-70% of the SDG targets are already taken into account by national policies and strategies, the main messages indicate.

Togo (LDCs) notes that a training was organized for national and subregional actors on tools and methodologies for integrating SDGs and their targets in planning processes. The Government is also developing its national development plan 2018-2022, which will incorporate the SDGs. To this end, indicators have been defined, and objectives, targets and indicators have been prioritized. Other initiatives undertaken by Togo to implement the SDGs include: the development of a national program for capacity building and modernization of the State for sustainable development; a training on a sustainable development analysis grid (GADD-F) and on a strategy for sustainable public procurement in Togo; and raising awareness of parliamentarians, the media and civil society on the Goals.

In its main messages, Botswana (LLDC) outlines its efforts to align it national Vision 2036 (2017-2036), its National Development Plan 11 (2017-2023), and the associated District and Urban Development Plans with the SDGs. In terms of institutional arrangements, Botswana says it has established a National Steering Committee (NSC) to drive the policy agenda, a Technical Task Force (TTF), and a SDG Secretariat in the Ministry of Finance and Economic Development (MFED), and has defined a National SDGs Roadmap. The roadmap identifies broad areas to be covered in the medium to long term (coordination, ownership and leadership; implementation; and data and progress tracking and reporting), and a plan of action for the next five years which will be broken down into annual workplans.

Botswana also indicates that the country has mapped SDGs indicators and aligned them to the national Vision 2036, the National Development Plan 11 and the African Union Agenda 2063, and that Statistics Botswana will be responsible for monitor progress on SDG implementation in conjunction with the National Strategy Office (NSO). Its VNR will focus on SDG 1 (No poverty), but will highlight links with other goals related to hunger, health and well being, gender equality, infrastructure, and means of implementation. It also reports that several private sector entities (including the Botswana Stock Exchange and Debswana) and financial institutions are embracing the SDGs in the country.

Zimbabwe (LLDC) notes it will prioritize SDGs 2 (zero hunger), 3 (good health and well-being), 4 (quality education), 5 (gender equality), 6 (clean water and sanitation), 7 (affordable and clean energy), 8 (decent work and economic growth), 9 (industry, innovation and infrastructure), 13 (climate action) and 17 (partnerships for the goals). It reports that its Government has established an institutional framework for the SDGs, including: a steering committee chaired by the Chief Secretary to the President and Cabinet to provide overall guidance and strategic leadership to the process; a technical committee; thematic clusters for mainstreaming and localizing the SDGs; a monitoring and evaluation policy; and a Parliamentary Thematic Committee on the SDGs.

Azerbaijan (LLDC) mentions that it has a National Coordination Council for Sustainable Development (NCCSD) with its Secretariat in the Ministry of Economy, and has established four thematic working groups (TWGs) on: economic growth and decent jobs; social development; environmental issues; and monitoring and evaluation. On data and statistics, the country’s main messages note that intensive consultations are still in progress to align the SDGs, their targets and indicators to national priorities. The State Statistical Committee (SSC) is a key national agency responsible for processing and maintaining a database to measure progress on the SDGs, and all central government agencies and local governments have appointed focal points to support the SSC in collecting and processing data, and introducing new indicators for SDG monitoring and evaluation. Azerbaijan reports it will create an interactive web-platform to promote awareness on global and national SDG goals, targets, milestones and indicators, and will convene, in 2018, a National SDG Conference in collaboration with the UN Country Office to discuss means of implementation for SDGs at the national level.

Tajikistan (LLDC) notes that its National Development Strategy (that goes to 2030) and its Mid-term Development Program for 2016-2020 are two key tools for nationalizing the SDGs. As to its main messages, Tajikistan has identified strategic development goals for the next 15 years that are aligned with the SDGs, including on: ensuring energy security and efficient use of electricity (SDG 7); ensuring food security and people’s access to good quality nutrition (SDGs 1 and 2); and expanding productive employment (SDG 8). It adds that the integration of related SDG indicators into its monitoring and evaluation system will be a priority for the next five years.

Ethiopia (LDC and LLDC) reports that all the SDGs have been integrated in the priority areas of its Second Five Year Growth and Transformation Plan (GTP II) 2015/16-2019/20, approved by the Council of Ministers and ratified by the House of Peoples Representatives of Ethiopia, and that it has become legally binding to implement the SDGs in the country. Its main messages state that approximately 70% of its annual regular national budget allocation has been focusing on poverty oriented sectors such as agriculture, education, health, water and sanitation, and rural roads, and that its SDG-integrated GTP II seeks to attain a national poverty level of 16.7 % by 2019/20.

As per its main messages document, Afghanistan (LDC and LLDC) says the Ministry of Economy is the lead line ministry and focal point for the coordination, monitoring and reporting on the SDGs, and the nationalization process is closely coordinated with High Council of Ministers. The country indicates that it has an oversight ‘National Coordination Commission’ supported by a secretariat and technical working groups that work on data collection and verification, reporting and follow-up mechanisms for the SDGs. The Government is finalizing the nationalization of SDGs, targets and indicators, and has conducted around 50 workshops, seminars, symposiums and conferences with civil society organizations, private sector actors, academia, media, youth, students and women’s groups on this matter, the document says.

Nepal is another LDC/LLDC country that has volunteered to present its VNR during the HLPF 2017, but its main messages are not available yet. The VNR presentations are scheduled for the second week of the 2017 HLPF, as part of the three-day ministerial segment (17-19 July). [VNRs 2017 Online Platform] [HLPF 2017 Website] [SDG Knowledge Hub Story on VNRs Online Platform]